Car of the Month

This is what Doug Dufour of Hattiesburg, MS writes about his newly acquired white GTX with 440-4bbl and A/C....    In November of 1969, I had just turned 17 years old.  I was a drummer in a rock band taking a break at home in Mississippi after a 6 month southeastern tour.  The music business was good and I had a pocket full of cash from 2 years worth of steady gigs.  I needed a new car to travel in so off I went to the new car show rooms to look at what the "Big 3" had to offer for 1970. After two days of looking at and driving Chevelles, Cameros, Mustangs, Torino GTs, 442s and a really cool yellow Buick GTS, I passed the Chrysler/Plymouth dealership where a Plum Crazy Duster caught my eye.  I pulled my 1961 Valiant in and found that the father of a high school friend who owned the dealership was willing to show me what Plymouth had to offer.  Mr. McCormick showed me around the lot filled with Road Runners, Cudas, Dusters, and GTXs.  He must have been an old Motor Head because he had a lot full of Hemis and 440 Six Pack cars in high impact colors along with the Land Yachts Plymouth offered that year.  I liked the Duster but was concerned about getting all of my drum gear in the car with a couple of the guys in the band riding with me.   Being a good salesman, and the father of a teenager himself, he suggested that the 340 Duster with a 4 speed and A/C would be a good car for me, and my father would like the price.  I told him I needed something with more trunk room and that I had $7000 cash in my pocket and my Dad was not involved in my purchasing a car.  So he led me to the showroom.  My Dad owned the local International Harvester Truck dealership and he and Mr. McCormick were friends so I was sure he would call to check my story out as soon as I left.

There in the showroom under a "Rapid Transit System" banner were six of Mopar's best road warriors.  A yellow Hemi Cuda convertible, a red and black 440-6 Superbird, an orange 383 Roadrunner,  a purple and white 340 Duster, a limegreen hemi GTX, and a blue and white 440-4bbl. GTX.  Imagine having these cars today!  Mr. McCormick pointed out that the blue and white GTX was ordered as his new demo  but he needed to sell his Sport Fury before he started driving it.  I picked his demo because it was highly optioned, and it was the only one with air-conditioning.  The car was loaded with almost every option available and a couple of dealer installed options as well.  I went for a test drive as he figured the price for me, and called my Dad.  When I returned I was thrilled to say the least.  The total price was $5888.00. including TT&L.  I laid down the cash and left in my Valiant to find out what he and my Dad had discussed while they performed the Customer Service Prep on my new 1970 GTX.  My Dad brought me back to pick it up later that day and he told me Mr. McCormick had called him to verify I was able to buy a car and tell him what I was buying.  I think my Dad was as excited as I was about my choice.

I had no idea what a special GTX I owned until years later.

Fast-forward 11 months and 62,000 miles on the road in the GTX and hundreds of gigs around the country, I returned home to Mississippi for a much needed R&R.  One week after I returned home I received a greeting letter from dear old "Uncle Sam".  My draft number was 12 and being an intelligent and healthy red-blooded American boy, I hurriedly signed up with the U.S. Air Force.  In November of 1970, one year after buying my GTX, I was headed for basic training in San Antonio, TX.  I made a deal with a friend to buy my GTX for $2500 with the understanding I would buy it back for the same amount when I returned from basic training and technical school.  One week before I finished basic training I received a phone call from my Father informing me that my car had been totaled.  My friend survived a 100 mph plus crash but there was little left of the car.  When I returned home from the USAF technical school my GTX had been sent to the scrap yard and crushed.

Fast-forward 32 years.  After all these years of wishing, I am again the proud owner of a 1970 GTX.  This GTX is Alpine White with gold accent stripes and black performance hood treatment.  It is a 440-4bbl., automatic on the floor with air conditioning,  power steering, tic-toc-tac, and AM radio.  Its kind of eerie sitting in it and remembering those 11 months in my first one.  But is sure brings back some good memories.  I'm sure this GTX and I will make some new memories in the years to come.

I purchased this 1970 GTX from Scott Lindsey and Craig Anson in Oklahoma City, OK in March of 2002.  The car is originally from Kansas and is about 90% restored.  My plans are to trace its history and complete the restoration and add a few items to make it a daily driver and maybe take it to a few shows.  The car currently has a 1972 vintage 440-4bbl. in it but it came with the original 1970 block that I plan to build and put back in the car.  The original black vinyl top was removed during the last restoration.     Editors note:  Since Doug wrote me this letter, he has informed me that his GTX now had the correct black vinyl top installed and he has added the following: an Edelbrock 750 cfm carb, cruise control, power door locks, power trunk lock w/remote, Grant wood steering wheel, auto alarm system w/ fuel lock, Sony CD/MP3/XM radio w/4 speakers, and 2 1/2" exhaust w/70 series flowmaster mufflers.  The picture below is what the GTX looked like when Doug bought it while the first picture above is what is looks like now.     (5-27-02) 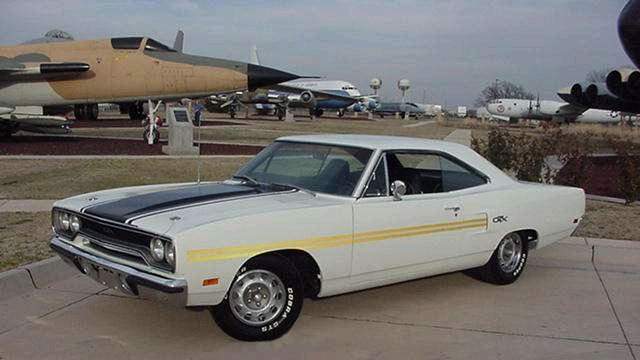 Just email me at 1970GTXregistry@gmail.com with your picture and I'll
make your car the feature car on this page for a month!

Past Car's of the Month